Introduction – Why  a Sinclair C5?

I was looking around for a project with a mechanical element, as I usually repair old electronics. Walking through London one day I came across a beautifully restored DeLorean – complete with all the essential ‘Back to the Future’ conversions – Mr. Fusion and a flux capacitor. Although a similar project had great appeal, DeLoreans cost about £30,000 and I know nothing about cars. So looking around for a more manageable project, I decided a Sinclair C5 fitted the bill. Like the DeLorean, they were produced in Britain by a short lived company. And like the film ‘Back to the Future’, the C5 came into being in 1985. And of course, both have futuristic styling. 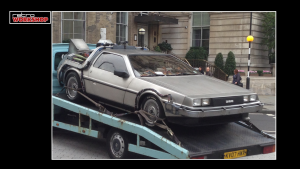 Having done a little research, I realised that many C5 parts were hard to come by (and expensive), so getting an incomplete C5 in a state of disrepair  would require a great deal of work to get it into good condition.

Since purchasing the C5 I’ve learnt there are other options for getting hold of a C5:

The C5 has a small amount of electronics to function, and the key circuitry is contained in ‘the pod’. This is the small black box that sits in the passenger area and has a couple of displays to keep check of the motor current and battery charge level. Inside the pod is a custom chip, called a ‘ULA’. These were prone to fail (or rather easy to damage) and getting hold of an original replacement is nearly impossible. You can get hold of modern replacements  (based on micro controllers on tiny circuit boards) but these require modifications and a reasonable level of skill to fit them. I decided I wanted to obtain a C5 with a working pod and original ULA.

Having bought the C5 it was time for a quick spin around the block. We soon ran into issues: the motor kept cutting out. It appeared to be an intermittent problem, and sure enough waggling the wires at the rear of the pod produced a temporary work around. This is likely loose connection, or tarnished contacts on the cable that leads to the pod and should be easy to fix. 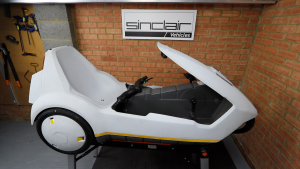 The rear right-hand wheel also appears to be a bit wonky. Either it is loose, or perhaps there is an issue with the bearings, and warrants closer inspection.

The bodywork is in pretty good condition bearing in mind the vehicle’s age, and the fact that it is made from plastic (polypropylene). There are a few minor scrapes here and there – nothing too deep. I’d like to know if the body can be sanded, or if these blemishes are best left alone. It will also need a good clean. The side ‘decals’ (yellow reflective stickers on the bodywork and wheels) are torn and will need replacing. The lights (front and back) are present and in working order, although the light switch in the passenger cabin is rusty.

The tyres are the original ‘Sinclair’ branded parts, but are cracked and will need replacing. Also the inner tubes will need swapping as the tyres go flat after about a week. The brakes are in poor condition. The cables and brake pads are worn, and the left hand brake stick on (and is ineffective). 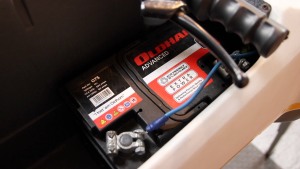 The C5 is currently powered from a car battery. This seems to work OK, but it isn’t secured in the passenger cabin – this will need some straps to tie it down. I received an original Sinclair battery charger but the special cap doesn’t fit the car battery. Also it is a little rusty and the cables damaged. I bought a Halfords car battery charger as the Sinclair unit looks like it may be unsafe. Eventually I’ll replace the battery with a ‘Leisure battery’ – the sort that are used in caravans and boats. These are better suited to the deep discharge cycles that they will receive in the C5. I currently need to disconnect the negative terminal in order to depower the machine. This isn’t ideal, although the vehicle did come with a small spanner in the boot for this purpose! A better solution will need to be found. 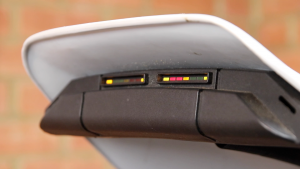 The pod is in working order – this shows the following information in two LED bar graph displays:

This appears to be in full working order, apart from the intermittent connection issue discussed earlier. 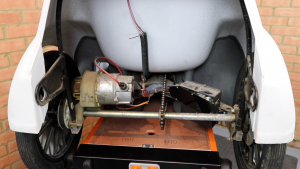 Having removed the boot, I was able to inspect the external condition of the motor, the pedal drive chain and the ‘control box’. These all look OK, apart from the electrical control box, which has had part of its cover replaced with a loose piece of plastic. A genuine part will need to be found, and as stated earlier this could be a challenge. The chassis (Lotus designed!) is in reasonable condition with a few very small spots of rust. I’d like to get a closer look at the chassis, which means a complete strip down which will be undertaken in the next video.

In order to fully assess the rust on the chassis and any other issues, I’ll be undertaking a complete strip down on the C5 and dealing with the rust. Hopefully along the way we’ll get a feel for the vehicle mechanics and get to the bottom of the wonky wheel.

Do get in touch with any comments or suggestions…

I’ve not owned a C5 before and am aware there is a great deal of knowledge out there in the C5 community. So if you have any ideas of how best to deal with any of the issues, please do get in touch. You can contact me via this website. Or leave comments on the YouTube video or Twitter. – click the icons at the bottom of the page. I also keep a regular eye on the ‘Sinclair C5 Owners’ Facebook forum, so look out for me on there.